Currently, the shenanigans of Europe’s most historically elegant fashion houses have become epically soapy. Fast-paced storylines, dramatic characters, backstabbing, power struggles, money, and, of course, glamour. And you don’t need to know what happened before to follow along. Just sit back and get sucked in…

The World Is Full of Married Men.

Married gay men. Now that gay marriage is legal almost everywhere––Go Ireland! (recently voted the most tolerant place in Europe. High five, my people!)––all these newlyweds fluttering about the ateliers with a rosy post-nuptial glow must be an absolute dream to work with.

Actually nope. Not so. Shade will be thrown and the art of the putdown is sharpened to a finer point than the cutting shears.

There was a time, not too many hemlines ago, when L.A. was considered a fashion junkyard of Ed Hardy prints, bootcut jeans, and itsy-bitsy bikinis worn with cowboy boots. Then Hedi Slimane was appointed head of Yves Saint Laurent. He did this: Saint Laurent Paris; moved the 50-year-old couture studio to Los Angeles and set about casting as his muses lank-haired guitarists from the Viper Room instead of coiffed debutantes from the Ritz Carlton. Between rock gigs, he churns out $3,000 dresses that look like ones you can get in Top Shop. 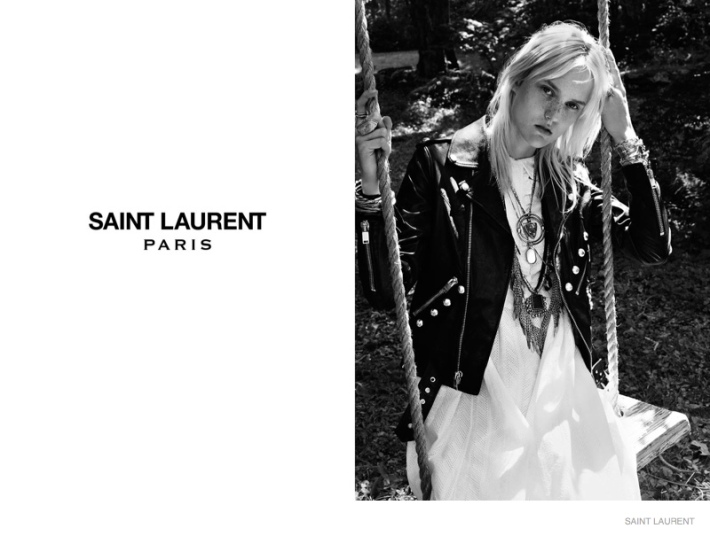 Then Karl Lagerfeld, the grand dame of the old guard, put Kendall Jenner on the Chanel catwalk and the tectonic plates of the fashion industry shifted. Some of us stumbled and had to grab onto the nearest tray of mango margaritas for support. I suppose it’s not her fault she was born into the trashiest family since the Santangelos. However as Coco Chanel herself once said, “Don’t spend time beating on a wall, hoping to transform it into a door.”

Be honest, Karl, Kendall is a bit of a wall. But she’s a wall with 40 million Instagram followers and you couldn’t turn that down, could you?

Getting her own back on naysayers, other models who moan that she hasn’t earned her success, and the aforementioned familial scourge, Kendall, just this week, reportedly had acclaimed model Jourdan Dunn ousted from the Victoria’s Secret show to make room for her to step out in sparkly panties. She also banned her spotlight-hungry siblings from the same event. 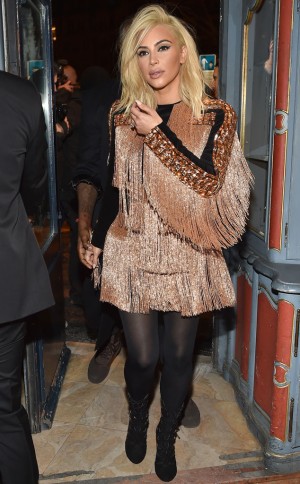 Kanye West’s fashion collection sold out this week. Fashion insiders pan his designs but Millennials cannot get enough of those $300 holey sweaters.

Meanwhile, he dresses his wife up to resemble complex window treatments complete with swags, tails, drapes, pelmets and tassels.

She seems to like sitting front row at fashion shows playing the part of theatre curtains.

There is only one truly powerful female tastemaker in the male-run womenswear industry who has worked her way past the male bouncers to kick ass. This willowy Englishwoman is Phoebe Philo and she has made the Parisian house Celine, founded in 1945, dominate the world of luxury goods like never before in its history.

But she does so from her London base where she lives with her gallerist husband and three children because otherwise she would be a pill-popping alcoholic nervous wreck like all the others.

Did you see the queues outside H&M this week? Au contraire, that wasn’t a sale. Those  enthusiasts were in line to shell out $600 for a frock from the Balmain for H&M collection. Founded in 1945, Balmain is currently designed by fashion’s golden boy, the trout-pouting, man-scaped Millennial, Olivier Rousteing, whose one million Instagram followers regularly see him lying among tousled sheets or lazing by the pool surrounded by a bevy of models and musicians.

What goes around comes around––and, like one of Krystal and Alexis’s best catfights, it bitch-slaps you to the ground, pulls you around by one leg till your skirt’s hiked up around your waist, your hair’s in disarray and three fingernails are lost.

A previously silent villain, Shaw-Lan Wang, came creeping out of the shadows a fortnight ago to announce her evilness with a cliffhanger to beat them all. She unceremoniously fired fashion’s loveably rotund and bespectacled bow-tie aficionado, Alber Elbaz, who raised the 120-year-old house of Lanvin from the ashes fourteen years ago. As Lanvin’s majority shareholder, she seems ready for a nasty divorce, belittling his designs in the press to the point that he has threatened her with a gag order and the maison’s 330-member staff have launched a protest for Alber’s return.

There are two notorious players about town; they are the landlords, the kingpins, the big bosses. Lock up your designers for when they roll down their tinted windows, like the suavest of Casanovas, they will seduce with honeyed words, promise happy-ever-afters, shower you with money and whisk you off to an ivory tower on the rue du Montaigne.

They are the corporate giants of luxury, LVMH and Kering. If they lift up their sunglasses to give you the once over, designers, it’s curtains.

Confessions of a Wild Child 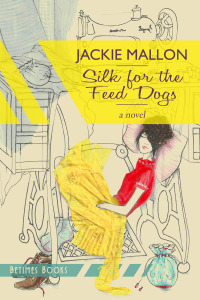 Wandering somewhat naively Into the scene is new girl in town, freckled redhead, Kat Connelly, an unlikely young fashion designer fresh off the farm but ready for the fast lane. Or so she thinks.

While she’s soon dressing celebrities, navigating the megalomaniac egos of designers like a pro, and getting swept up in steamy Italian love affairs, what sacrifices will she be forced to make as she attempts to reach the heights of the international fashion industry on her own terms?

Find out in my novel Silk for the Feed Dogs available here.

Like Loading...
Tags: Alexis and Krystal are back on the catwalk, Balmain women look straight out of Dynasty, Balmainiacs should be introduced to TV show Dynasty, Christmas presents for your fashion-obsessed friend, Did you buy Balmain for H&M?, great fashion books, how the story of Silk for the Feed Dogs relates to the fashion industry today, I must reread my Jackie Collins novels, Olivier Rousteing, Olivier Rousteing's success at Balmain, Silk for the Feed Dogs takes you behind the scenes of the fashion industry, the state of fashion today, The vast appeal of Jackie Collins novels