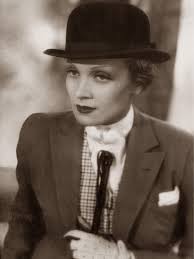 Most fashion students naturally embrace a level of gender nonconformity. Already equipped with a counterculture rebelliousness, they are taught to decode garments and approach dressing as an extension of their creativity.Their favorite designers have dealt in androgyny for decades: Ann Demeulemeester, Jean Paul Gaultier, Giorgio Armani…At the heart of the flapper frenzy Coco Chanel dressed women in slacks made from tricot knits previously used in men’s underwear; Marlene Dietrich in her dapper top hat and tails worn with glamourous pencilled eyebrows is still a source of inspiration.

Clashes, collisions, juxtaposition, they’re what makes the fashion world tick. This meets that, hard meets soft, girly meets masculine, sporty meets chic, city meets desert…Two distinct entities are mashed together. Separately, they are easily understood; together they become something new, yet familiar. But in this era of gender-fluidity, male meets female, and all is no longer so clear-cut.

I hear the phrase “I want my clothes to be unisex” from my students. Traditionally we would correct the student who had clearly misunderstood and meant “androgynous.” Men and women can’t wear the same clothes, we would counsel. Items need to be cut differently to translate to the female form. Breasts and hips must be considered in the fit of the garment…Continue to article