I attended the US opening of Dior and I last night after which the director Frédéric Tcheng answered some of our questions. As I sighed over a post-event glass of wine, overcome, I tried to compose this little report. Words don’t come easy but I’ll try…

If you’re frantic for an escape from the flashy trashy lycra-stretched-to-within- an-inch-of-its-life fast fashion quagmire that we’ve unknowingly sunken into (well, I was wrong, words do come easy), enter here. It’s a room with walls of fresh flowers. The smell will remove all trace of the grime from outside. Pick up your skirts and make haste. But lift them higher than Jennifer Laurence did or you’ll never make those steps. We’re going into the loftiest of ivory towers. The couture atelier of Christian Dior in Paris…

Frédéric Tcheng, the director of Dior and I

“Raf doesn’t want a movie” was the response director Frédéric Tcheng received when he initially broached the idea of filming new designer Raf Simons’ arrival to the historic house in 2012. After much written communication back and forth, Raf Simons, an intense, somewhat brooding, shoe gazing type eventually agreed to a week’s trial with the camera.

The director describes himself as “an outsider in the fashion world” (despite co-creating previous fashion-based films Diana Vreeland, The Eye Has to Travel and Valentino, The Last Emperor) and Simons, a nightclubbing Belgian minimalist, is considered every bit the outsider entering the Parisian couture echelons. Maybe they recognize in each other kindred souls because Tcheng manages to capture some very private moments during possibly the most nerve-wrecking time of this young designer’s life.

Simons arrives at Dior, speaking no French, and has eight weeks to make a couture collection materialize, which is half the time it usually takes despite being under twice as much global scrutiny. His previous position, taking over from Her Minimalist Majesty, Jil Sander after she jumped ship from her own company, offered no preparation for this gig. For Simons at Dior is also stepping into the matador pumps of John Galliano, one of our time’s most celebrated fashion visionaries who has recently tumbled drunkenly, Dali mustache and pirate scarfs akimbo, from the balcony of the ivory tower and into his own reality show. You couldn’t make this stuff up. Not even Jackie Collins, nope.

Oh, and I forgot to mention it’s a haunted house Simons finds himself in. The specter of the founder Mr Dior, who revolutionized women’s post-war fashions, wafts through the film both in both black and white footage and in voiceover passages from his memoir. The seamstresses describe how they often feel his presence roaming the atelier as they work. Tcheng compares Simons to the young woman in the Hitchcock movie, Rebecca, who steps into the haunted Manderley. Will the head seamstress be like the stern housekeeper Mrs Danvers, I wonder?

Rather him than me.

The Haunting and the Haunted: Christian Dior and Raf Simons

Simons arrives, and is introduced to the atelier staff

However, the white-coated atelier team, the pillars of the maison, some of which have been there forty years, are a truly welcoming bunch. “They had no hang-ups with the camera whatsoever,” says Tcheng.

No snooty Parisian attitude besmirches these hand beaded tulle skirts; the seamstress’s salt-of-the-earth demeanor just makes their workmanship appear all the more luxurious. Headed by the bubbly Florence and worrywart Monique, this huddle of artisans, as approachable as a knitting circle, gossip, giggle, share Haribo candy and whisper first impressions of the new arrival. Their major concern is that they get to see the film when it is done.

After Tribeca Film Festival, Tcheng rented a big theatre in Paris and invited them all for a viewing.

Maybe the title then would have had to become Dior and I and Him.

My favorite character is Simons’ loyal right hand, the impishly handsome Pieter Mulier, who has been with Simons from the early days of his own menswear label through Jil Sander to Dior. He steals the show the way Grace Coddington did from Anna Wintour in The September Issue. His flirtatious interactions with everyone from the seamstresses to us in our theatre seats add the lightheartedness necessary when talking frocks––even if the frock in question costs $90,000 and takes 150 man hours to assemble.

I am tickled pink as rose petals to see some former colleagues of mine among the design team. It just makes the human stories at the heart of the film even more accessible for me.

On the tower there’s virtually no ivory left to be seen. The flowers have covered it up.

And, oh, the perfume… 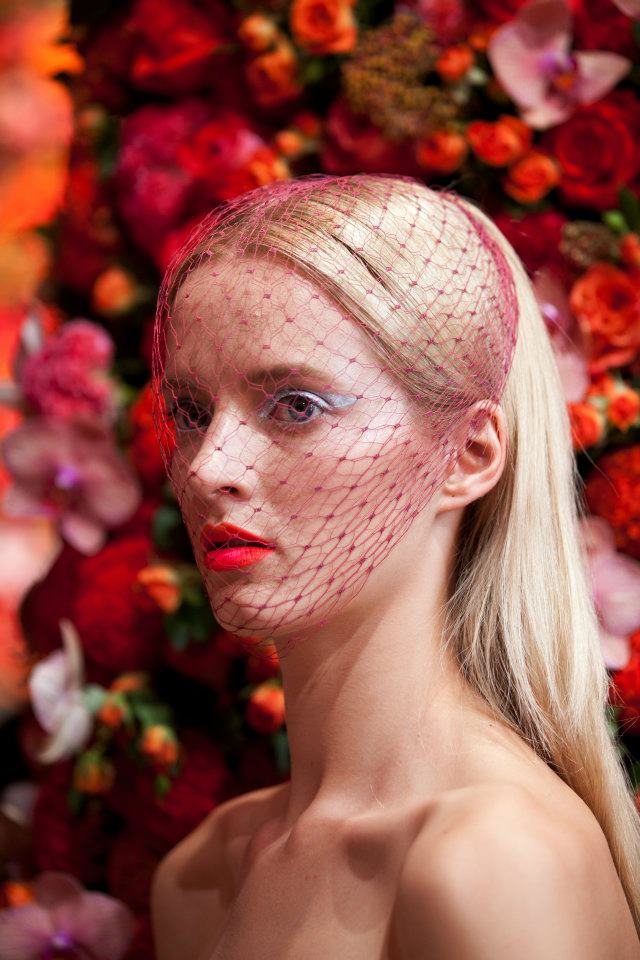 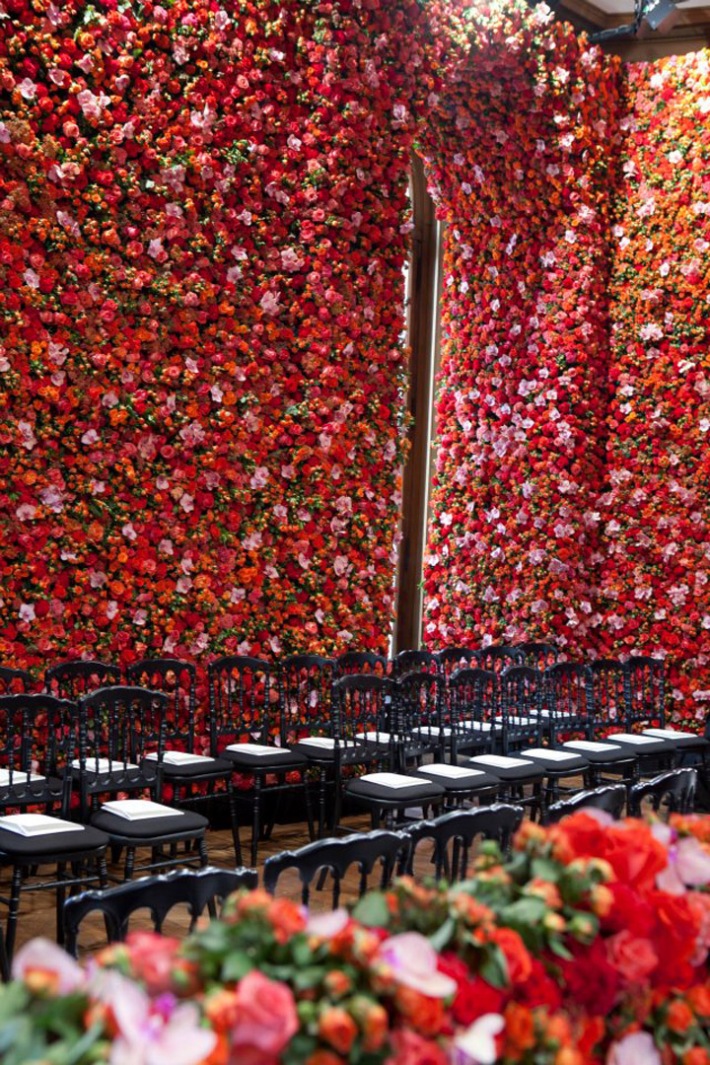 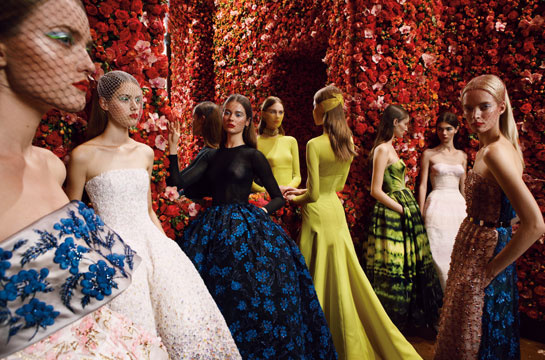 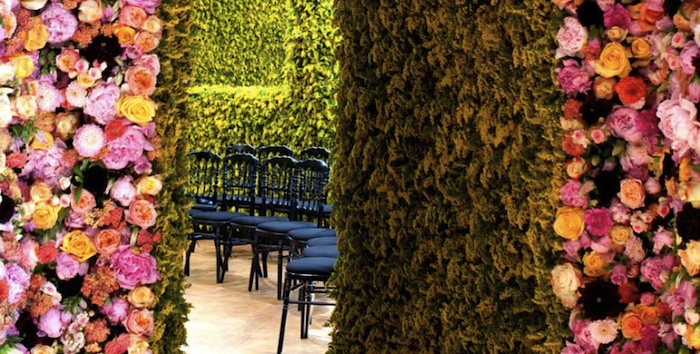 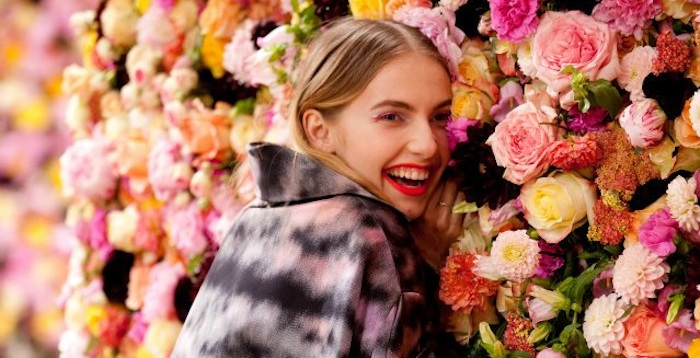 My novel, Silk for the Feed Dogs, set in the international fashion industry also follows the trials and victories of an outsider who gains entry to a historic fashion house. You can get it here.