The Plaza Hotel is legendary.

It opened in 1907 when rooms cost $2 50 per night. Now they cost around $800. At the time it placed the largest ever single order for gold-encrusted china and boasted 1,650 crystal chandeliers.

In today’s New York it looks discretely down its nose at all these precious little lifestyle and boutique hotels, hipster upstarts serving their Stumptown coffee as if that can begin to compete with the ceiling of the Palm Court.

As a Manhattan landmark it represents the regal opulence of The Great Gatsby and not the Trumped up hubris of The Donald. It continues to be a goddess of the silver screen from its first starring role in Hitchcock’s 1959 thriller North By Northwest to parts in The Way We Were, The Great Gatsby, Almost Famous, Sex & The City, and American Hustle.

Appropriately for this time of year, it provided the backdrop to Kevin’s misadventures in Home Alone and Home Alone II. I find it impossible to feel sorry for oh-so-forgotten-about Kev when he gets to call these digs home. 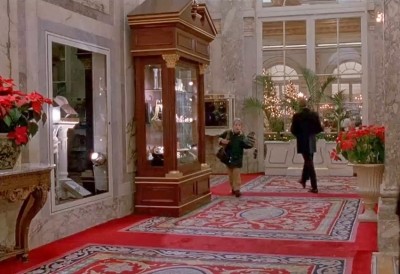 Kevin arrives at The Plaza.

In 1966 The Plaza was the setting for Truman Capote’s lavish and fashionable Black and White Ball to celebrate the success of his novel In Cold Blood.

The Beatles stayed there while they conquered America.

It featured in several of F Scott Fitzgerald’s novels.

In fact Fitzgerald was so fond of the Plaza Hotel that Earnest Hemingway famously advised him to donate his liver to Princeton but his heart to The Plaza.

There is even a saying, “Nothing unimportant ever happens at The Plaza.”

Carrie Bradshaw outside The Plaza where she tells Mr Big of his new fiancé, “Your girl is lovely, Hubble” echoing Barbra Streisand’s words in The Way We Were

So, with all that in mind, how could I not feature The Plaza in my Christmas short story set in Manhattan?

In Blue and Unassuming Under a Christmas Star, I check back with my friends Kat and Edward from Silk for the Feed Dogs, self-defined luminaries of the modern age and legends in their own minds.

If there was a Black and White Ball today they’d blag a ticket and peacock about the Palm Court in the most outrageous costumes. Edward’s would undoubtedly have feathers; Kat’s, beads. Their eyes would sparkle to rival every crystal of those 1,650 chandeliers. They would be hiccuping with disbelief that they’d managed to wangle their way in as they gulped champagne form the gold encrusted china. Kat however wouldn’t be fooled into thinking her dream man was sipping a cocktail and preparing to make his move from across the room. She would be holding off to hit the downtown dive bars for any hope of an exciting Manhattan tryst. But Edward? Oh, he’d be breathlessly expecting the crowds to part and a hedge fund manager in showgirl spangles to lock eyes with him and sashay his way.

Find out what they really get up to at The Plaza in my short story, Blue and Unassuming Under a Christmas Star. No Christmas party can really start until Kat and Edward have been taken to its bosom.

Read it in PDF format here or download a free PDF copy of GIFTS here!

For a print collector edition, click here or for an e-book edition here