News emerged yesterday that the disaster fund for the families of the victims of the Bangladeshi factory collapse is not even half full. The Rana Plaza Donors Trust Fund, established to compensate the victims’ families, was “open to contributions from any organization, company or individual.” Therein lies the rub. No one specificallly was made pay. Although at the time of the tragedy, spokespeople from Benetton among other megabrands were promptly wheeled out to peddle remorse for the cameras, they haven’t put their money where their mouth was.

Strewn among the building’s rubble were garments labelled Primark, Mango, Benetton, JC Penney, Joe Fresh and others. British retailer Matalan, deposited money just one day before the payment deadline, like a mean mobster with greased back hair and a sleazy smirk, grumbling past the cigar dangling from his gob, “Okay, okay, stop breaking my balls, there, have it, bleed me dry,” before dropping some coins from his trouser pocket into a bucket.

Reassuringly he pats the wad of notes still in his vest on his way out.

The day before the tragedy occurred banks were evacuated from the Rana Plaza building as a result of warnings about cracks in its structure. Not so the garment factories housed within. “Keep calm and sew on!” Mobster railed. “And if the roof collapses, you must use your head and upper body to protect the fabric. It costs $3 a yard!”

Over here in NYC; over there in London, in Milan and Barcelona, it’s business as usual. Don’t ask, don’t tell.

“Look at this $5 peasant blouse I got during my lunch hour,” a Times Square shopper chirrups, chuffed with herself. “I’ll get a turn out of that at the weekend. My boobs gonna look so cute!”

The blouse is shoddily made but if it falls apart during its weekend outing, she’ll get a full refund within 28 days. The manufacturer’s factory collapses and kills 1134 workers and injures 2500 others, and there’s no refund. There’s no returns policy for the families and the injured. The troubling culture within Rana Plaza continues. Why wouldn’t it? The only ones who were truly penalized are dead. That keeps them quiet. How often do we hear about the factory in Tazreen that caught fire and killed 112 people 7 months after Rana Plaza? There Walmart refuses to pay the victims’ families compensation despite being the manufacturer’s biggest customer.

When the headlines die down, the mean mobsters yell, “Get back to work and snap to it!”

And every time we buy a $5 t-shirt, we turn a blind eye and the mobsters grin toothily from behind their cigars.

Why is the fashion industry so skeevy?

Terry Richardson hides behind his camera to molest models and a few petitions erupt on social media only to drop from sight like yesterday’s status updates. Major glossy magazines explore with baffling regularity the novelty of white models wearing black face and get a slap on the wrist and slope off with a sheepish look. A 4-year-old in Starbucks throws a hissy fit spilling his mango banana milkshake down his cute outfit while the 9-year-year old who sewed it together hasn’t had a bathroom break in 8 hours. Any other industry would be rocked by these events. In fashion, they’re treated almost like faux pas.

Yesterday on a deserted NYC cross street I cut a red light on my Citibike and an officer fined me $190 on the spot. I guess he considered me a liability to myself and others and I must be held accountable.

1.2 million tons of clothing were buried in landfills in the UK in 2009. How reassuring to the families of those buried in Rana Plaza. Destruction breeds destruction.

But you’ve not seen anything yet. Today a Bangladeshi building, tomorrow the world! We’ll destroy it all! How’s that for power? 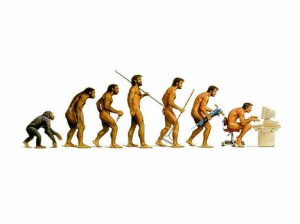 The Theory of Devolution-we were smarter as monkeys

The current fashion system is an example of Darwin’s Survival of the Fittest but there is no theory of evolution here. It is against nature and there’s no grand plan. No one  is in charge. We are careering towards extinction, the control panel sparking and fizzing, communicating nothing. Gluttony and hypocrisy and excess are rewarded at the expense of human life.

We in the Western world, smug imbeciles that we are, always believe we are the fittest, the strongest. Less developed countries are but satellites that revolve around us, serving our needs. If they get detached from us, splinter, fall away, it’s no great loss, we’ll always have options. Countries that should know better exploit countries that have no choice, kicking sand in their faces with their leather boots to punctuate their superior status.

Although once in a while Marc Jacobs might take a notion to donate a fraction of the profits of a t-shirt to Darfur. We consider that commendable. 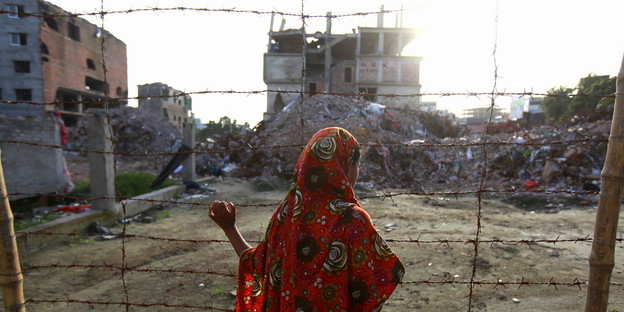 Sometimes I want to distance myself completely. I feel like an outsider looking in.

Why is fashion so skeevy?

My novel set in the international fashion industry is currently available. You can buy Silk for the Feed Dogs here.