A Tale of Two Cities

The gulf between London’s fashion education system and New York’s stretches wider than the Atlantic. We’re not only referring to two different continents but two different worlds. Me, I did my larnin’ in London (in Central St Martin’s back in the late 90s) and now teach here (as adjunct professor on an NYC-based fashion design programme since October 2011). I can attach myself to both schools of thought, and regularly do. I straddle the gulf. But it’s a hard position to maintain and my thighs are burning.

This post was inspired by an encounter I had today with a former student of mine.

She was one of our strongest students and she had excitedly applied to Central St Martin’s to do a BA in Fashion Design last year. This afternoon she told me she dropped out. It didn’t surprise me. Nothing has changed at my alma mater.

On her first day of her BA, when she opened her mouth to speak, one of the tutors said: “Oh, you’re American, you know nothing.” She thought this was an example of that world famous St Martin’s attitude of taunting the best out of you; testing your mettle for the road ahead. (I was referred to as “that stupid Irish bitch”, something which I fictionalize in Silk for the Feed Dogs).

Eagerly she set out to prove him wrong. All his criticisms she took on board and responded by being the consummate professional. She could construct and make patterns better than most. To no avail. So she tried the opposite tactic of rebelling, doing the contrary of what he suggested thereby asserting her independence. That always went over well at St Martin’s as screaming matches between students and faculty occurred with a healthy frequency and were often entertaining, everyone high on drama. But he saw through her attempts and ramped up his objection to her.

So she gave up. Of course that’s the worst thing you can do at St Martin’s. But they do make it so hard not to. 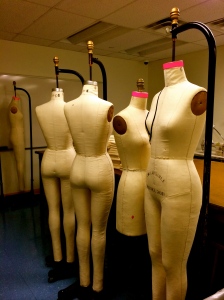 “See? American, what did I tell you?” he might say, vindicated, the implication being that if you cut Americans off from their surroundings of positive reinforcement they can’t hack it. Bottom line: You need to be able to take a kicking. They should put that in the prospectus.

I would get sued and hurled back across the pond if I dished out the sort of abuse to my students that was levelled at me. And it’s true, my students wouldn’t be able to take it. It’s not the American way. The St Martin’s faculty, like Debbie Allen in Fame, but less attractive ( oh, I can dish it up too, see?), represent the industry as an elusive holy grail destined to be beyond most of our reaches…

You got big dreams; you want fame. Well, fame costs and right here is where you start paying. In sweat. So if you’ve never had to fight for anything in your life, put your gloves on and get ready for round one…”

It was a free for all. Shy retiring types had their work cut out for them in the mêlée. Head down, bum up, the more determined could steer a course for himself but generally attitude was more important than sewing skills.

In American design schools, as I had suspected back then and can now confirm, sewing, pattern making and draping are more important.

How to win friends and influence people…dress up!

In St Martins, sketchbooks, lofty ideas and the intricacies of your design process are the key to success–oh, and elaborate head to toe outfits referencing three or more periods in history in one unique collage culled from the city’s best vintage markets.

My former student went in every day “in jeans and a T shirt, ready to get to work.” Well, that’ll not get you far, I should have warned her.

In an interview with The Guardian, Phoebe Philo, referencing the intellectual approach that St Martin’s is known for, said of her time there, “I just wanted to make a pair of trousers that made my arse look good, rather than a pair that represented the Holocaust or something.”

I’ll let others slug it out over whether New York or London churns out the most exciting runways, but there is no doubt to me that they turn out very different design graduates.I have seen it firsthand. New York designers are ready to take up position behind computer, sewing machine, cutting table or drawing board, to apprentice and learn a trade that can carry them through to retirement.

London designers are cut out to offer clever soundbites to the press and take up the gilded command of a historic maison, either that or join the unemployment queue. NYC students are looking for a job, London designers an appointment. New Yorkers to carve out, Londoners to dream up. New Yorkers are taught to rise steadily and consistently, earning titles to mark each step–design assistant, associate designer, senior designer, design director–Londoners are taught to blaze a trail never contemplating burn out until it’s too late.

Personally speaking, I believe St Martin’s made me what I am today, whatever that is.  The way the military might, I imagine, PTSD and all.

It is difficult to know in this era of fast fashion, collapsing factories and doomed, suicidal or disgraced designers which approach is best suited to where we want to be. But students are the future. Fees are increasing, grants are dwindling, and even though fashion is ever more globally connected we still refuse to educate to a global criteria. At an annual tuition fee of $30,000, students want it all: to attach themselves to the school that they believe will open the most doors for them but learn quantifiable skills that they can take anywhere too. They want to be commercially viable and great thinkers. To exercise unchannelled creativity and still answer to a brief. To design catwalk one offs and complete detailed tech packs. That’s what they’re paying for. Is it too much to ask?

Couldn’t we sample a little of both sides and design a brand new syllabus? Maybe schedule a meeting of minds somewhere in the middle… say Greenland?

My novel set in the international fashion industry is now available. You can buy Silk for the Feed Dogs here.