The Importance of Being Edward

Be yourself; everyone else is already taken- Oscar Wilde.

Edward is a self-made man. He isn’t like anyone else in his family, in his school, in his town. He has built a unique style of dress from the ground up by assembling pieces from the respectable English sporting traditions throughout the ages:  cricket, tennis, hunting, polo, boating on the Thames.  He is otherwise not remotely sporty.

Already at aged six, living in a Birmingham semi-detached, he believed himself to be preparing for a Little Lord Fauntleroy aristocratic adventure that lay just up ahead. He descended the stairs to dinner with a cane every evening until his exasperated father cracked it over his knee. So he tied an old watch face of his mother’s to a string of pearls and swung it from the pocket of his cords. 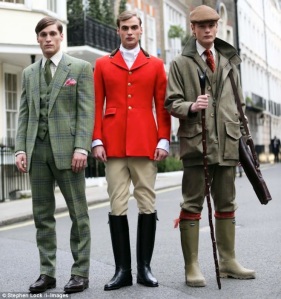 Savile Row tends to all a gentleman’s wardrobe needs 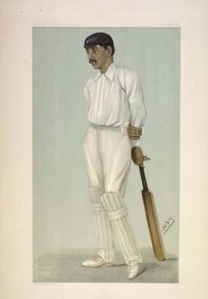 To this day, Edward still shuns clothing that evokes his blue collar upbringing,  favours ones that announce blue blood prominence. Elegance is lacking in today’s average man on the street. Why would you want to walk around with GAP barking from your front? There’s a gap between your two ears if that’s all you can pull together of a morning in front of the mirror.

Give him a strong silhouette and a proud shoulder and he is happy. If he had his way, there would be shoulder pads even in his knitwear. Posture is everything. But he is not opposed to drape nor a soft hat.

When he was studying at St Martin’s he used to enjoy walking up and down Savile Row and looking at the bolts of windowpane checks and pin stripes stacked in the windows, and seeing the tailors at work with their chalk. He never had the nerve to walk in. He had too much respect to just blow in off the street like a tourist. Men who entered those establishments did so with purpose. 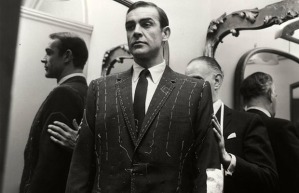 Sean Connery, his favorite Bond, had his suits made in Savile Row

But just strolling past served as an antidote to all that St Martin’s baloney about being avant-garde from morning to night. Stick a third sleeve on a tailored jacket, a  hood on a three piece suit. No, thanks. Edward hated all that. He was suspicious of student collections that had to work so hard at standing out. He stood firm on his vision and finally his tutors came round to his way of thinking. His superior patternmaking and construction skills won them over.

He only wears fabric he considers pedigreed and proven: wool, silk, cotton, linen, cashmere. If it had to be cultivated in a test tube over a bunsen burner in the name of modernity and then constructed into a garment that made the wearer resemble a balloon animal, it wasn’t for him.

He doesn’t do blends. Synthetics make his asthma kick in, he says. 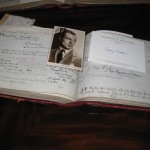 Actor, Gary Cooper’s measurements in the logs of Anderson & Sheppard

Edward loves knowing that each Savile Row master tailor keeps a detailed log of all his clients measurements and preferences going back decades. From bankers to silver screen heartthrobs, inside leg lengths were inserted into a column in a neat script. He remembers seeing somewhere Gary Cooper’s page of particulars displayed in a leather bound book from the archives of Anderson & Sheppard. 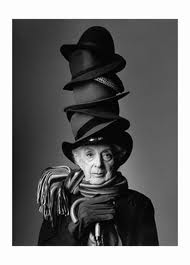 Introducing Edward’s other side

But Edward isn’t only about north of the border tweeds and wax Barbours. The more colourful side of his character also demands expression…

If one is to behave badly, it is better to be bad in a becoming dress-Oscar Wilde.

Incidentally, almost everything Oscar Wilde said tends to strike a chord with Edward.

He firmly believes that your appearance can assist in talking your way out of any situation. He has found himself in plenty of sticky wickets. But he believes his sartorial choices always put forward a case for his defence,  Dress for success, isn’t that the saying? If not, what’s the option, dress for failure? 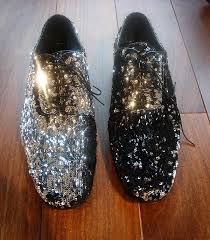 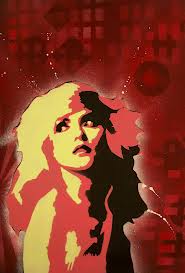 Despite his classic inclinations, he believes there needs to be more variety in men’s clothing. And more sequins. He isn’t shy of embossed velvet or brocade either. Oscar Wilde would sport such fabrics. Edward doesn’t believe there should be definitive separation between womenswear and menswear. That spoils the fun for everyone. The fit and flare of an eighteenth century frock coat might be considered womanly by today’s standards but he thinks it’s pure rock and roll!

For as long as he can remember he’s been dying to stride about in a cape.

His dad had been a huge fan of Basil Rathbone as Sherlock Holmes and BBC 2 reruns of the black and white mysteries were among the few things they bonded over when Edward was little. Well, those father-son warm and fuzzy moments were few and far between, so it’s no wonder the plaid cape left such an impression. Maybe he wanted to feel himself wrapped up in it like a big hug. The drape and swish; the authority it commanded; the comforting knowledge that Holmes and Watson were a dynamic double act who always solved the crime through rational thinking and keeping a cool head. You see? Dressed for success. Even his ten year old self noticed it. 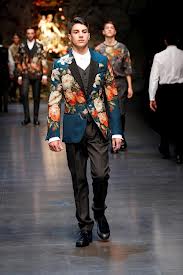 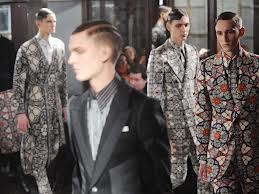 Of course there are some stylish men around that meet his criteria.  You just have to part the dead sea of hoodies, checked shirts, denim and lame logos to glimpse them.

Andre 3000 is a figure who sets a high style standard. Member of the famous Agnelli family of Italy’s Fiat empire, Lapo Elkann, is another who always catches his eye. 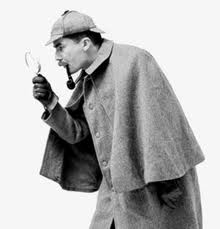 Sherlock Holmes and his trusty cape 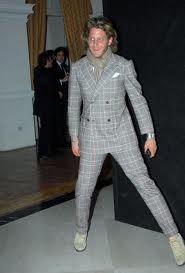 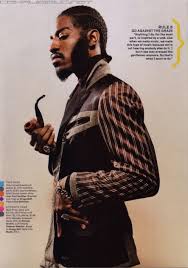 They demonstrate the flair and refined sensibilities that Edward strives to achieve in his designs as well as his wardrobe.  They have whimsy and confidence but don’t look silly.

Nobody should ever tell him he looks silly. Not after that stunt he pulled in his first year of high school… 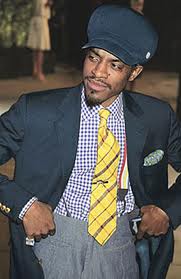 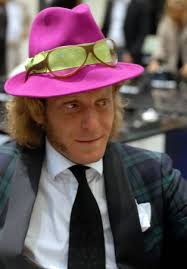 Colorful but dressed for success, the ‘Lapo of Luxury’

You can get to know more about Edward when you  buy Silk for the Feed Dogs here.